I was surprised to hear a four-year-old Filipina girl watching a Thai mermaid drama. Kezia raved about it  several times. It was three weeks til her birthday when I asked her what kind of cake would she like on her birthday. A mermaid cake, of course!

As a doting aunt, I fulfilled her wishes and she's in seventh heaven  the moment she set her eyes on her cake. 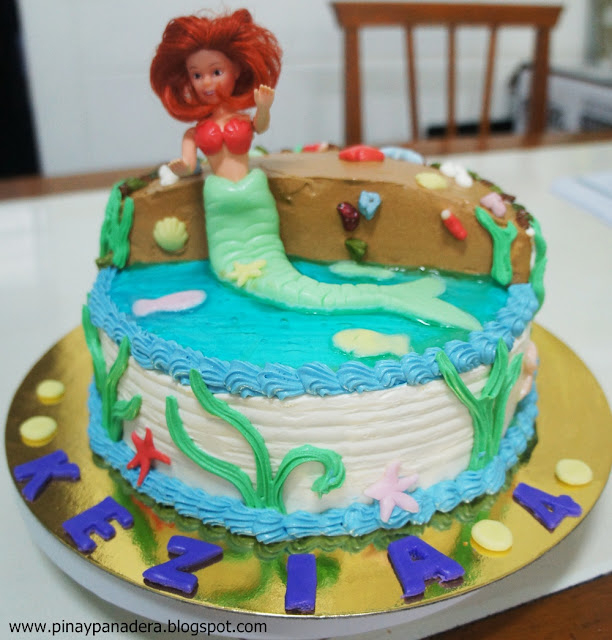 It was Friday. I had to make the mermaid cake and at the same time prepare and cook for our usual Friday night dinner. (See the early post). To lessen my load and save time that day, I opted for a  cake  box mix rather than bake the cake  from scratch.

I made a little modification to acquire softer butter cake.

I mixed the ingredients together. I  poured the batter into two 21 cm round baking pan, greased and lined with wax paper.  I baked it at 160 degress C for 30-35 minutes or until the toothpick inserted in  the center came out clean.

Although some changes were made in the ingredients, I noticed that the cake was not as soft as I expected. I will have to readjust the amount of water and butter if I were to do this next time. 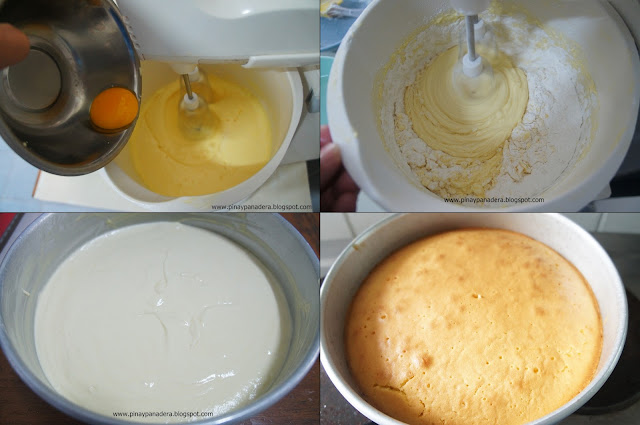 Time to decorate. I had two round cakes. I carved half of one cake. I stacked it up on the uncarved side to make the "rock" where the mermaid sits.I filled the layers with vanilla butter cream. 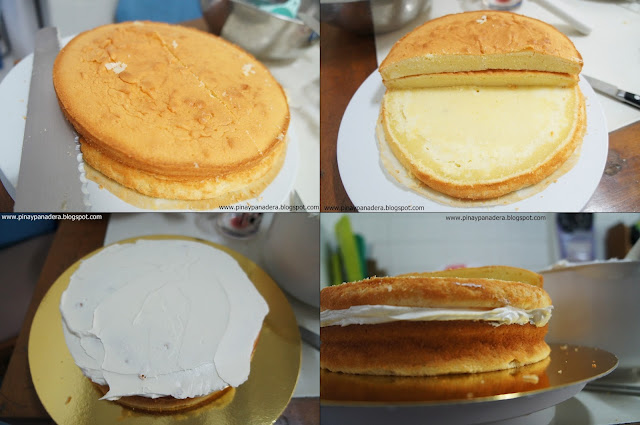 To have a smooth cake finish,I crumb coat the cake to seal in all the crumbs. I made sure the surface was smooth before it went inside the fridge. I applied the final coat with a thicker icing after chilling the cake for half an hour. I used  brown  for the rock and blue butter cream for the border. As for the sea,  I used blueberry jelly filling. 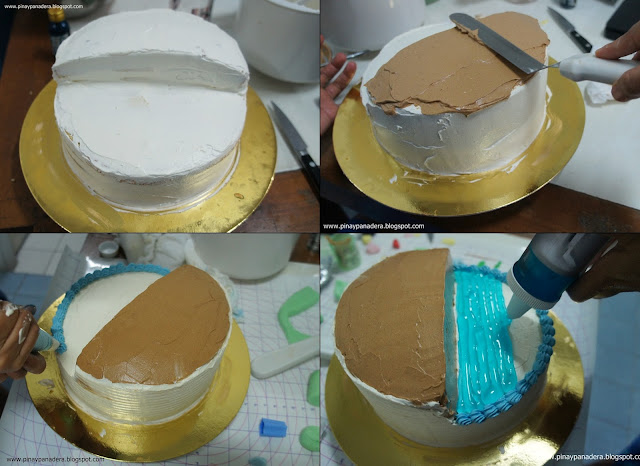 I wanted to pipe the seaweeds using a leaf tip but all I have is a smaller star decorating tip. It worked.I used chocolate rocks to decorate the upper part. I piped small round white butter cream for the pearls. 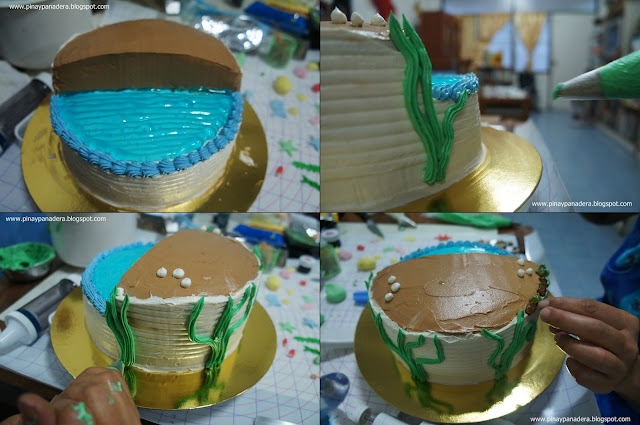 Now let's go to the mermaid and other decorations. For the mermaid's tail, I used green fondant.   I knead the fondant until it was soft and pliable before I rolled it into a log. I then rolled one end of fondant to make a tapered end.I bent the fondant into a loose "C" shape. To make the scales, I pressed the  smaller end of a round piping tip into the fondant lightly to create the half moon shape.

Tip: Depending on how big your tail is, you can use either the big end or smaller end of a round tip for the scales. 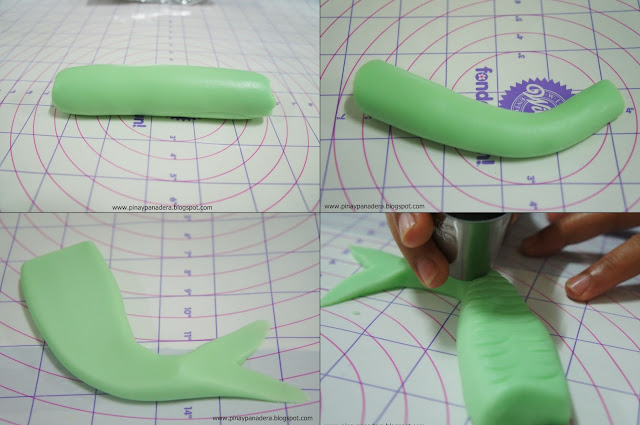 I used Wilton doll pick for the mermaid. My sister made the shell bra in two colors. Yellow and red. We both agreed to use the latter because I wanted the mermaid to be the striking feature of the cake and red was an attractive color.  She made other sea creatures for decorations. 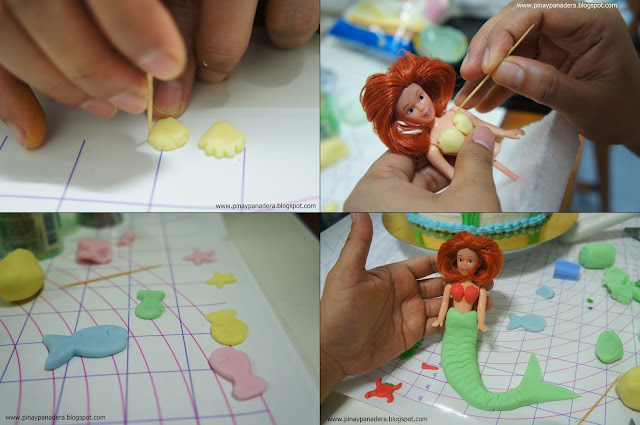 A big challenge I wasn't expecting was sticking the mermaid into the rock. I tried to lay the mermaid on the rock at first but it wouldn't stay upright. I used toothpick to stick her bottom into the cake but to no avail.  An idea struck me. Why not lay the figure on the water? It would make it more realistic and the figure had the rock to lean on. So that's where I decided to put her. I added the final decorations on the cake. Lastly, I cut out the letter shapes and number 4 for Kezia's name and age respectively. 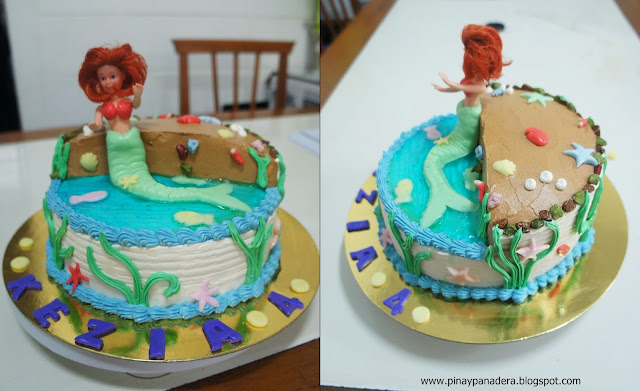 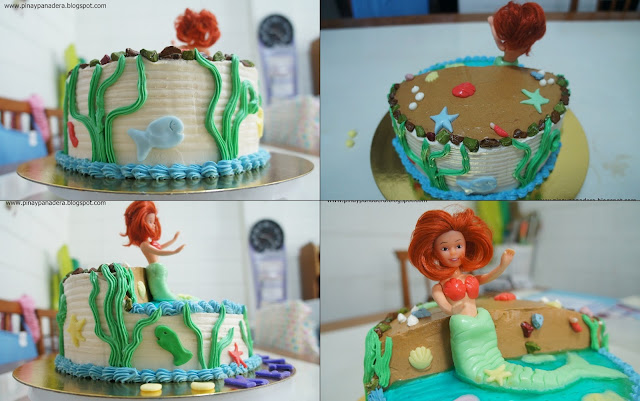 The birthday girl was all smiles. 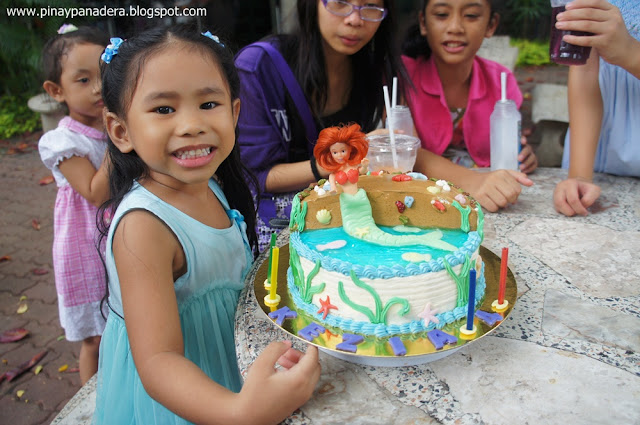 Kezia and her friends. 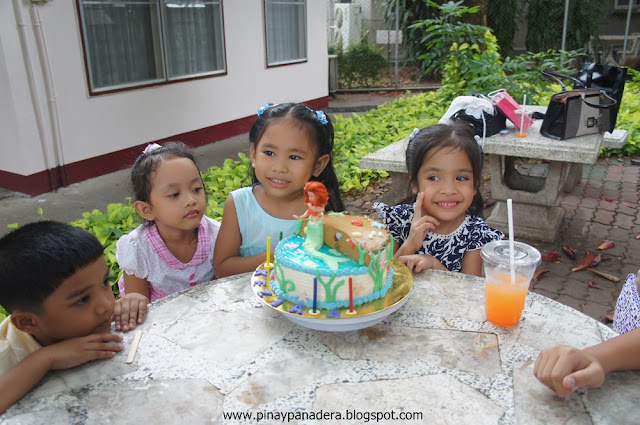 Time to blow the candles.She couldn't take her eyes off of her cake. 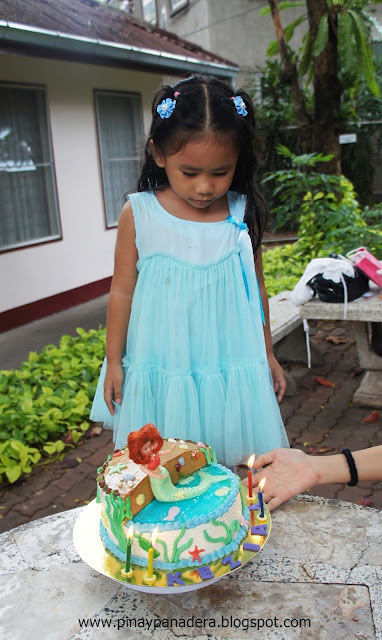 The first thing she asked after she blew the candles was to put the mermaid on her plate. Here she was savoring it. Happy 4th Birthday Kezia Naiah. 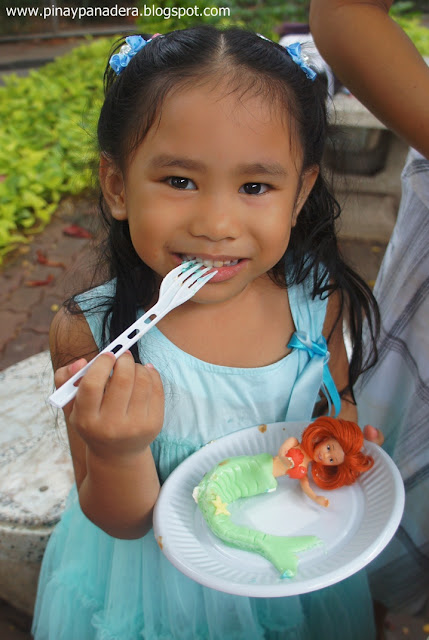