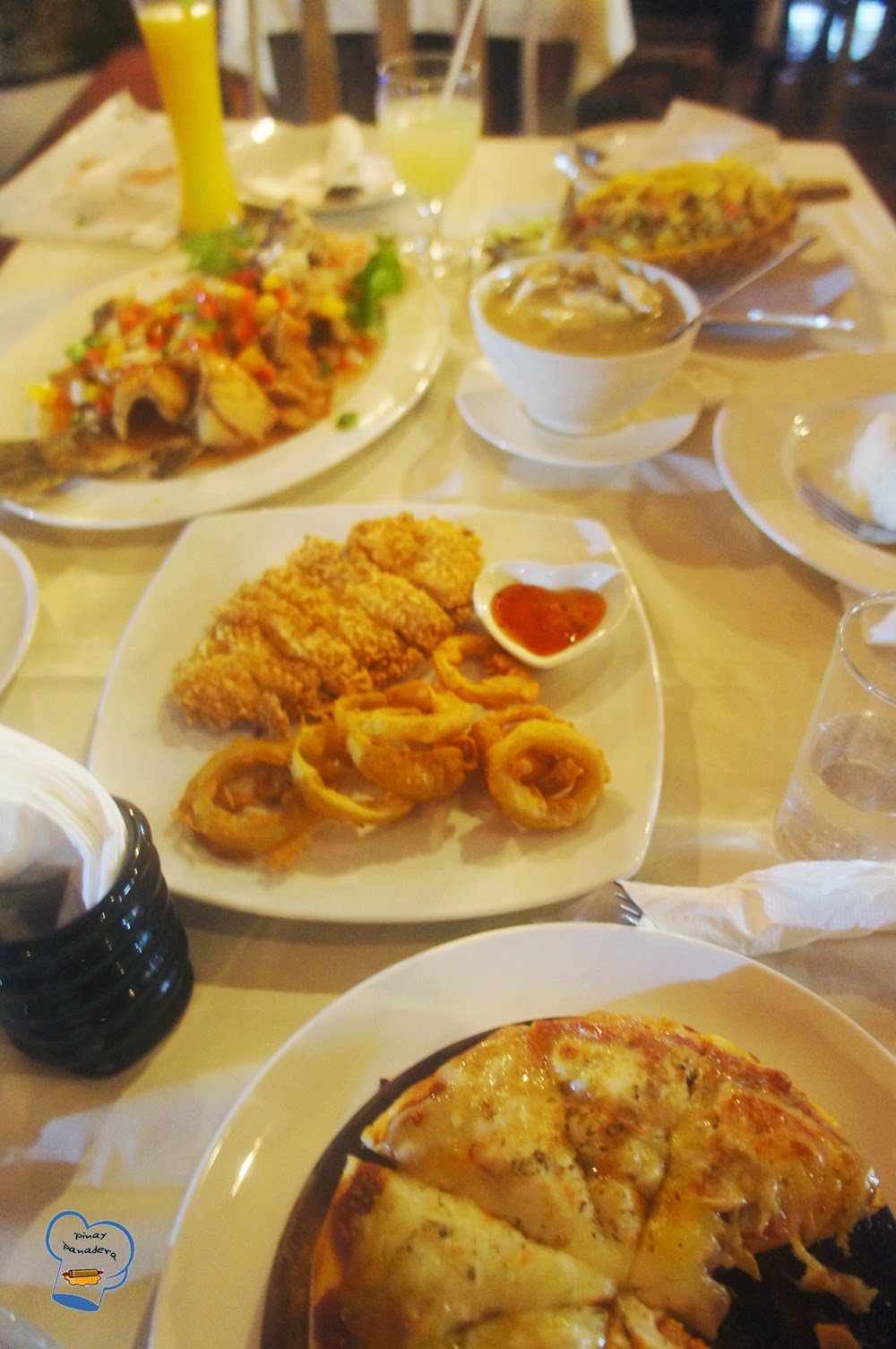 New Year's eve  was so much fun than the previous year. My sister and some friends came down to join me in welcoming the New Year. We ditched the traditional midnight feast (media noche) we Filipinos do to accommodate my wish. I had a really long day at work. I only had bits and pieces to eat so I could finish and set up  all desserts for the resort's NY eve gala dinner before I go home. I was famished.

The girls had just got back from the beach. They had late lunch but I needed to eat immediately. Deciding a place to go took us a long time. It's New Year's eve. I wanted to treat myself to something different that night. If only my favorite hang out place was closer. Well, it only takes 15 minute drive to get there but I had no energy left. A friend suggested we could go back to the same Thai restaurant they were at. It's only a few hop away from where I live. Well, I couldn't afford to travel anymore but I was really up for some adventures. We finally agreed to spend the evening at the Thai restaurant where they had lunch earlier.

I wanted a refreshing drink after all the hard work. I ordered fresh coconut juice. It  was ice cold but didn't have the sweet nutty taste. 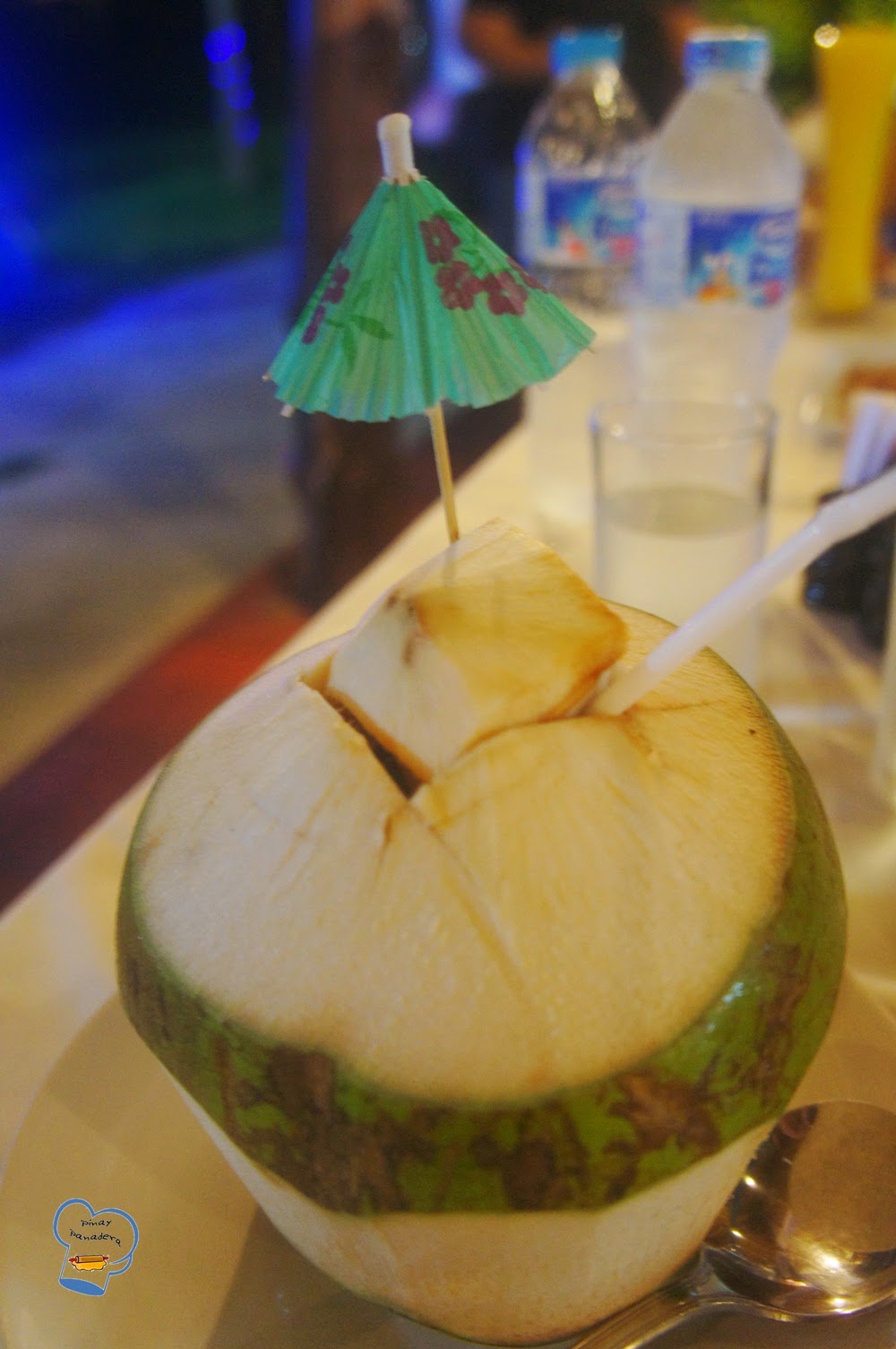 AC had a glass of pineapple juice. 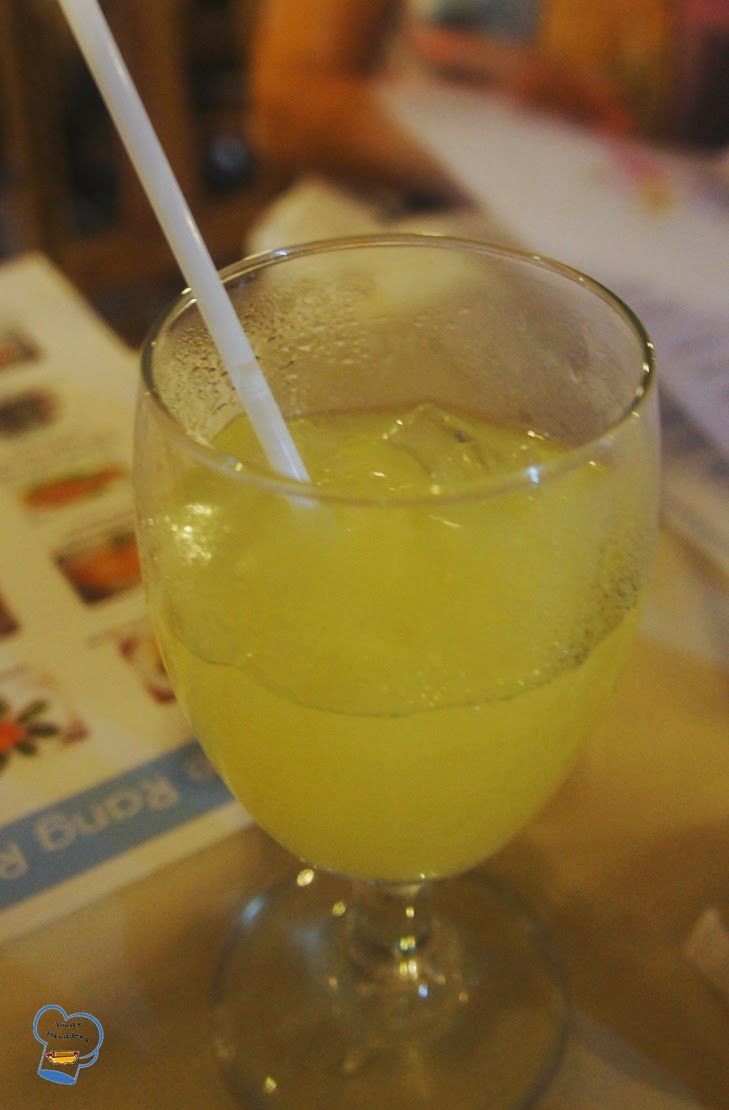 My sister's mango smoothie was quite good. I took a sip as soon as it was served. 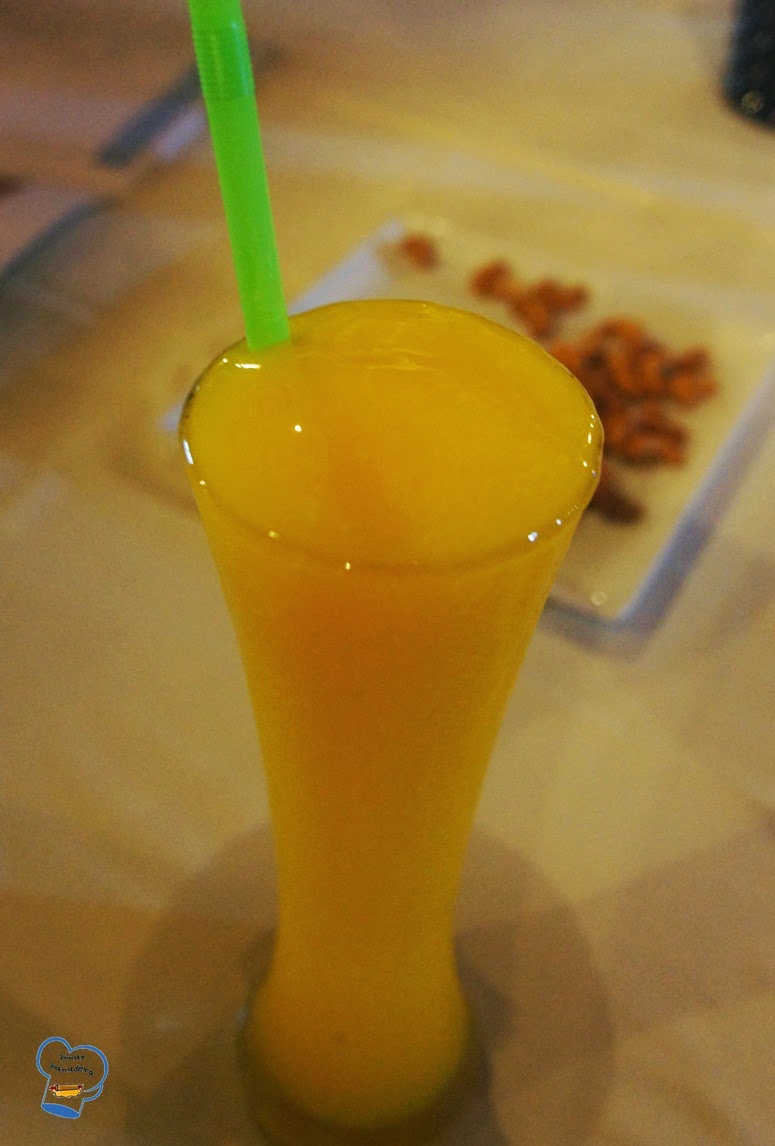 One of the girls brought her son with her. The little boy is a big fan of pizza. He had pizza for lunch and had eaten the same at dinner. 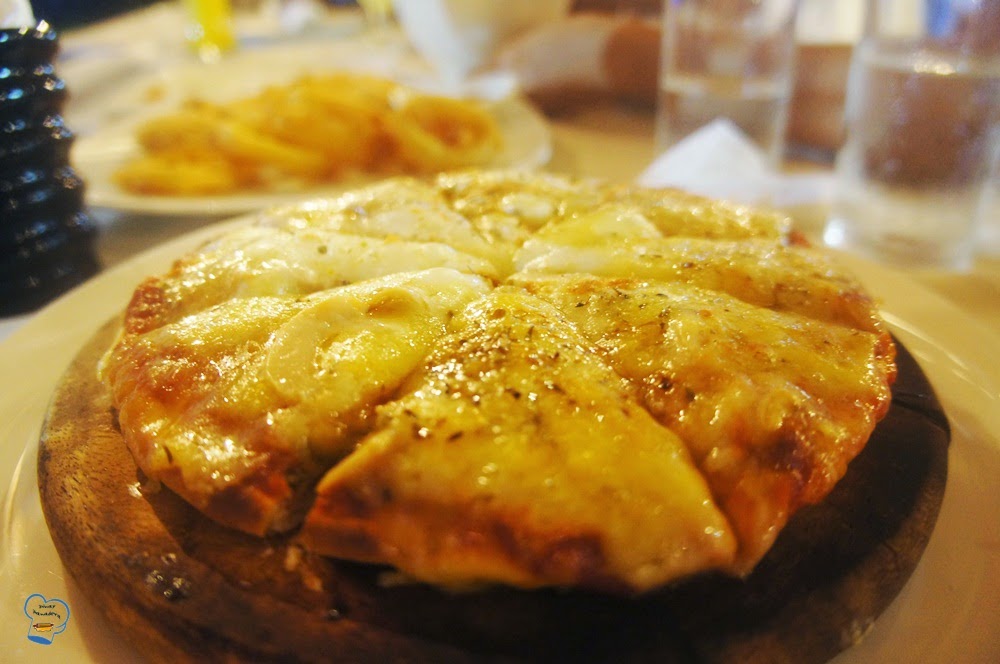 My sister's love for onion rings reflected in her order. The restaurant does not sell the dish on its own. The serving goes with a breaded chicken. She is vegetarian but ordered the dish anyway so she could have her onion rings.  As for the chicken breast, it was barely touched! 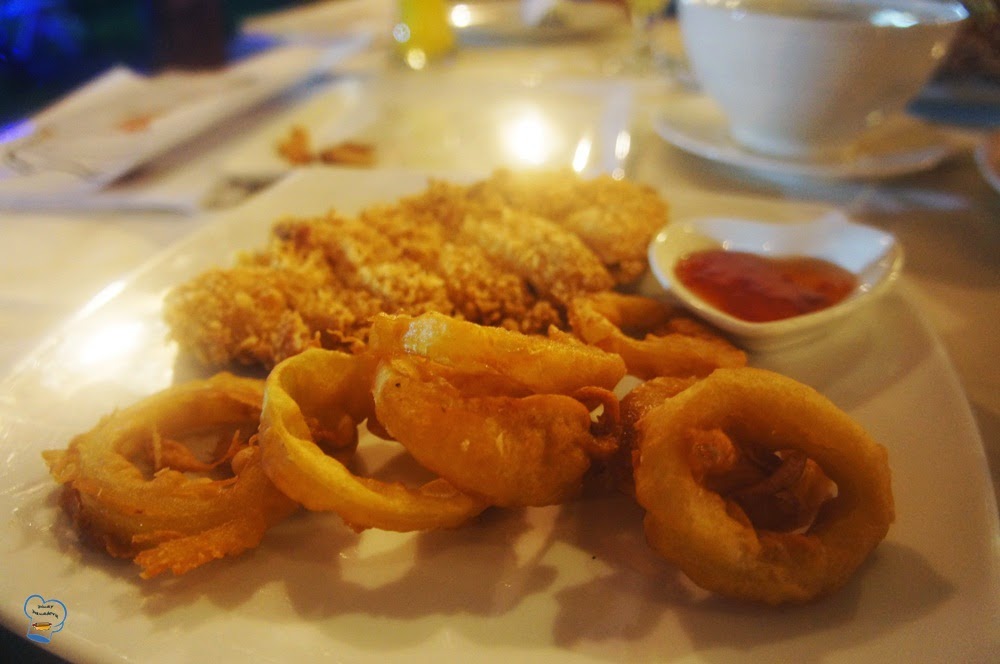 AC doesn't normally eat rice in the evening. The pineapple fried rice on the menu intrigued her. She wanted to try it but had ordered a Greek salad already . She asked if I wouldn't mind sharing it with her. I said I would try a little because I wanted to enjoy my deep-fried fish. I had only a couple of bites  I noticed it lacked the flavor of a true pineapple fried rice. 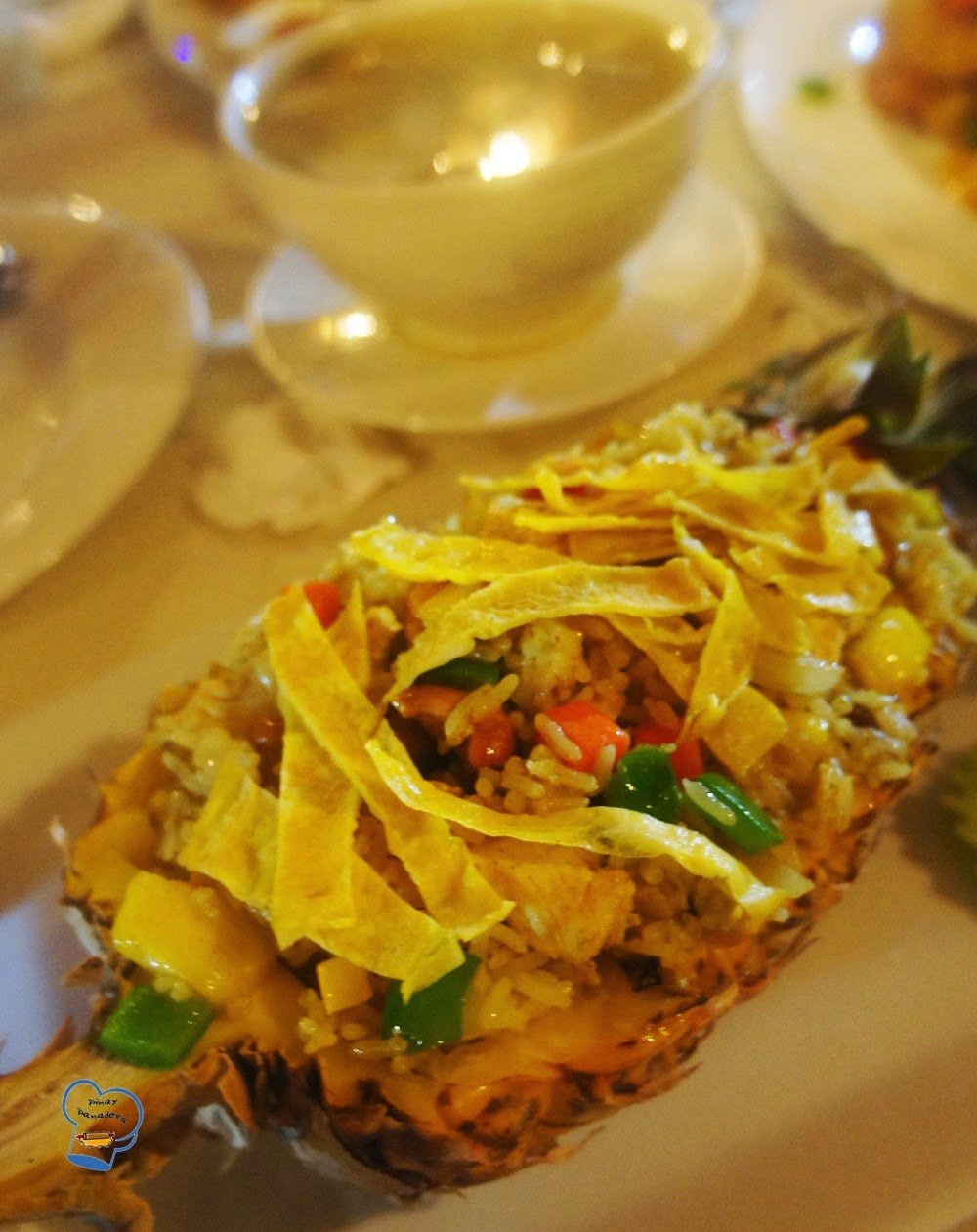 Here's what I devoured with gusto. Deep-fried fish in sweet chili sauce, topped with vegetables.I ate most of it. The crispy fried fish was good, the sauce needs more flavoring. 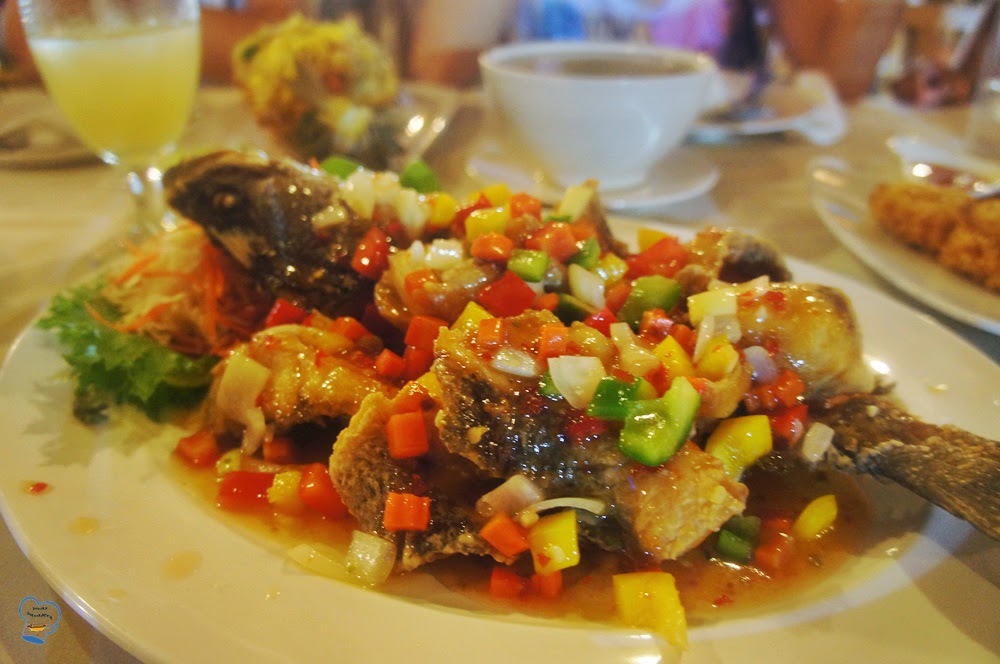 Another friend ordered her favorite fish tom yam. The girls liked it but I would have preferred a more sour taste. Its just me. 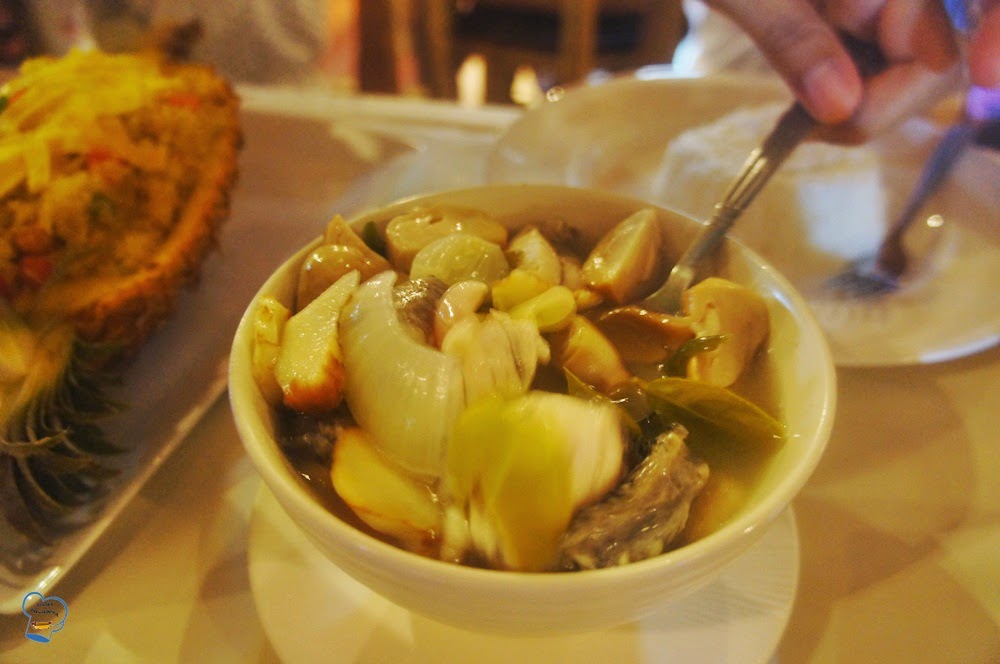 The best dish that evening was this Greek salad, made with fresh veggies and feta cheese. The dressing was perfect. Everyone enjoyed it. 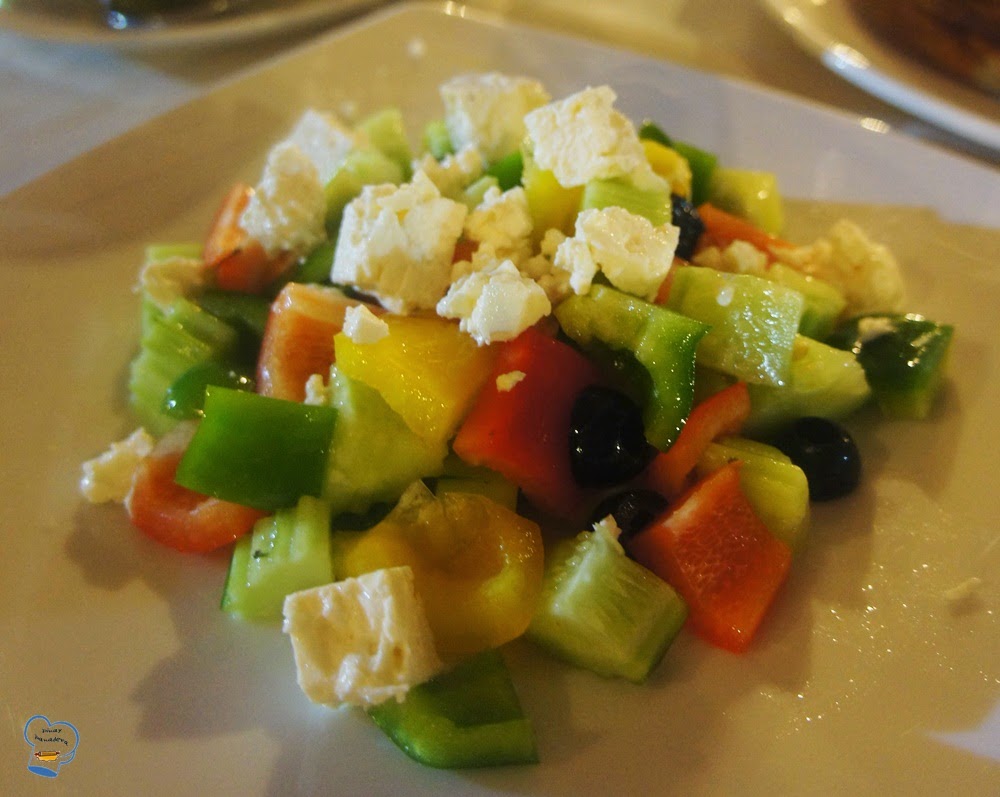 I was eager to go home. I couldn't keep my eyes open. I was up since 3:30 am.  It was two hours before midnight. I was burnt out and my brain was telling me to rest. The girls wanted to stay until countdown. The restaurant was in a perfect location, surrounded with all the hotels and resorts in the area. It's a great place to usher in the New Year and watch the grand fireworks display. The view  would be spectacular. They would not want to miss it.

We stayed at the restaurant for a bit. Other guests did the same. Then we went for a walk to burn off the heavy meal we've had. We walked back to the restaurant. The girls were so alive and excited they even played hopscotch on the beach. While they're having fun, I secured a sunbed by the pool for me to sleep in while we waited for the countdown. I had a nice nap for a little over an hour. The girls woke me up in time for the fireworks display. 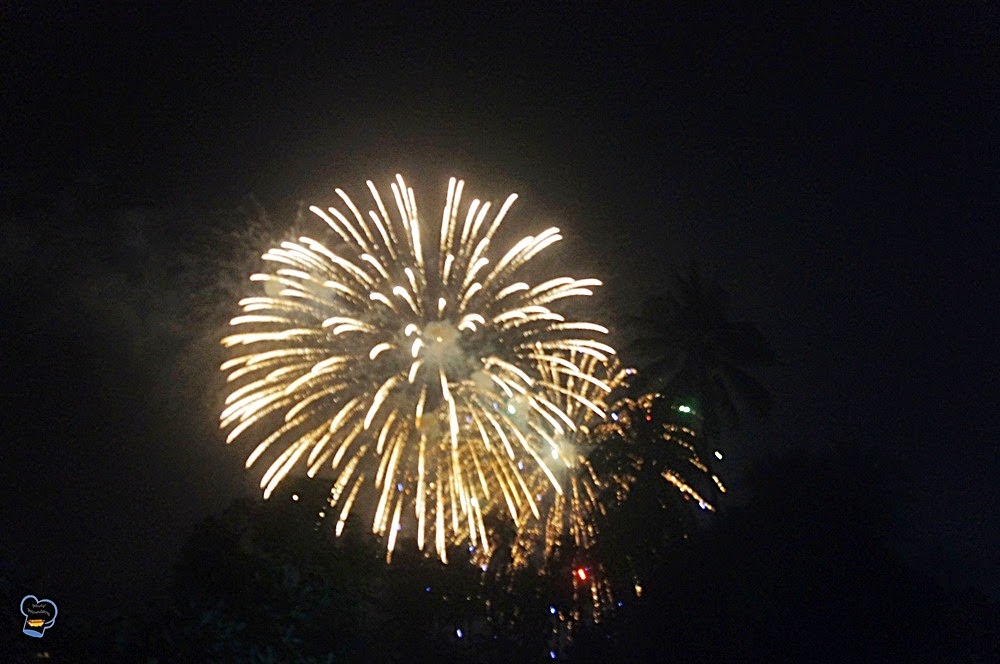 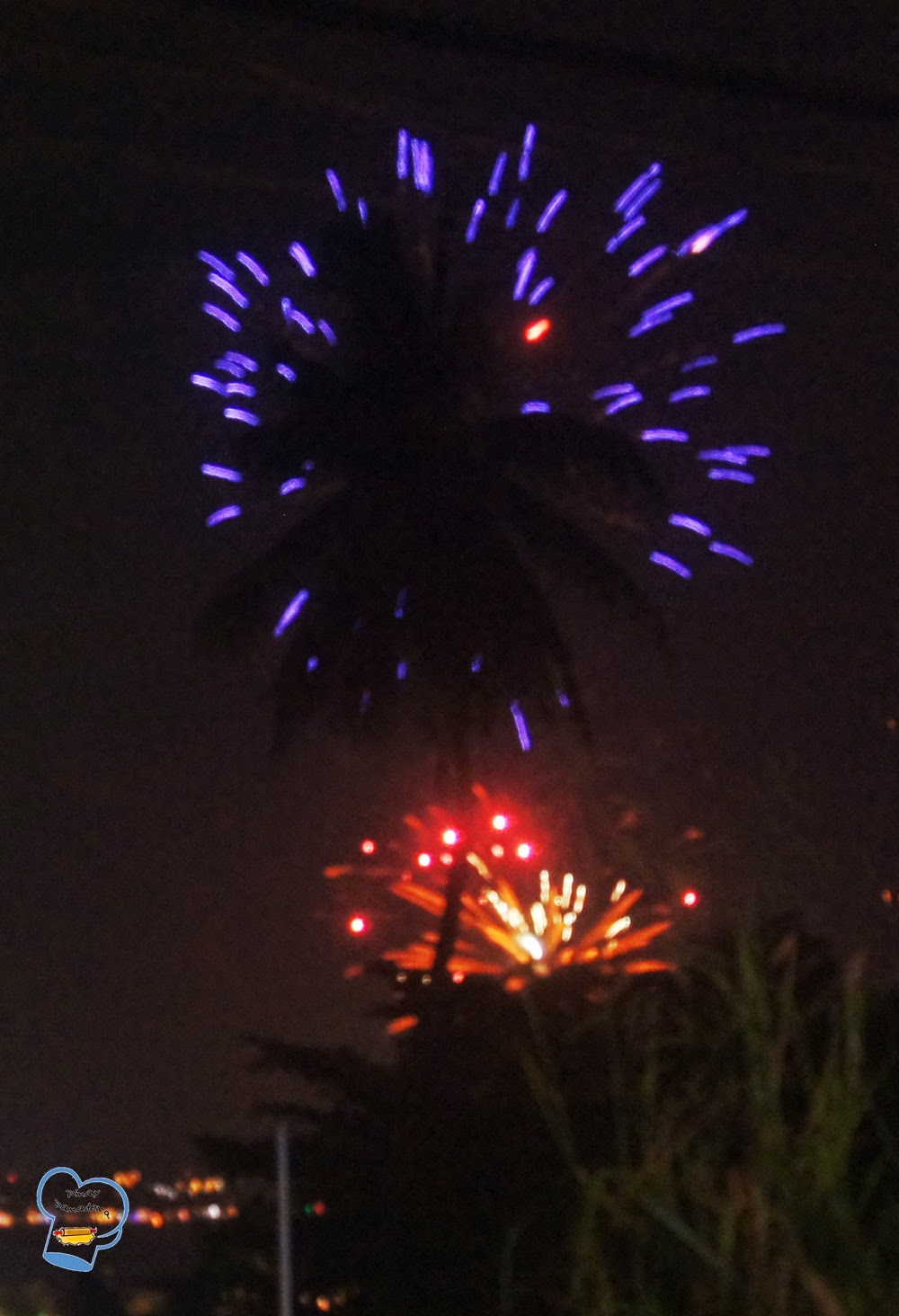 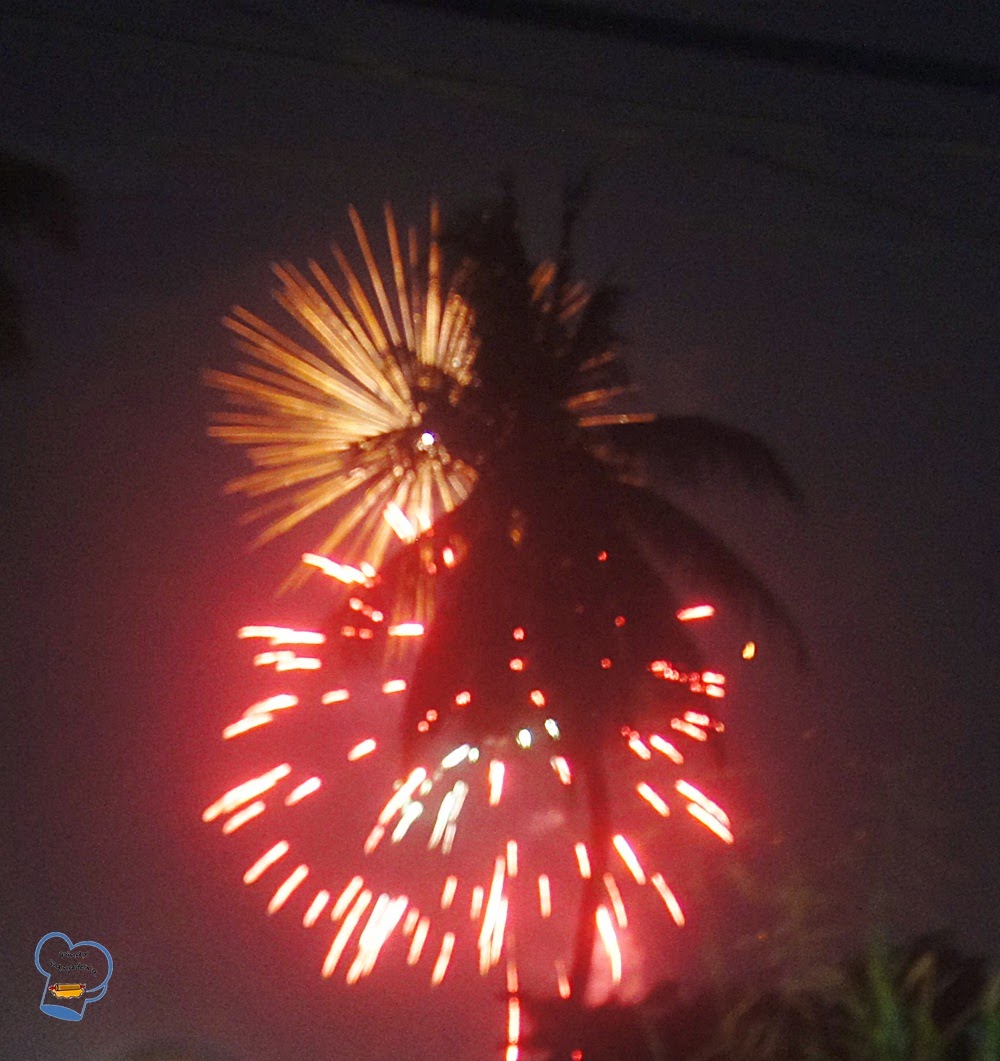 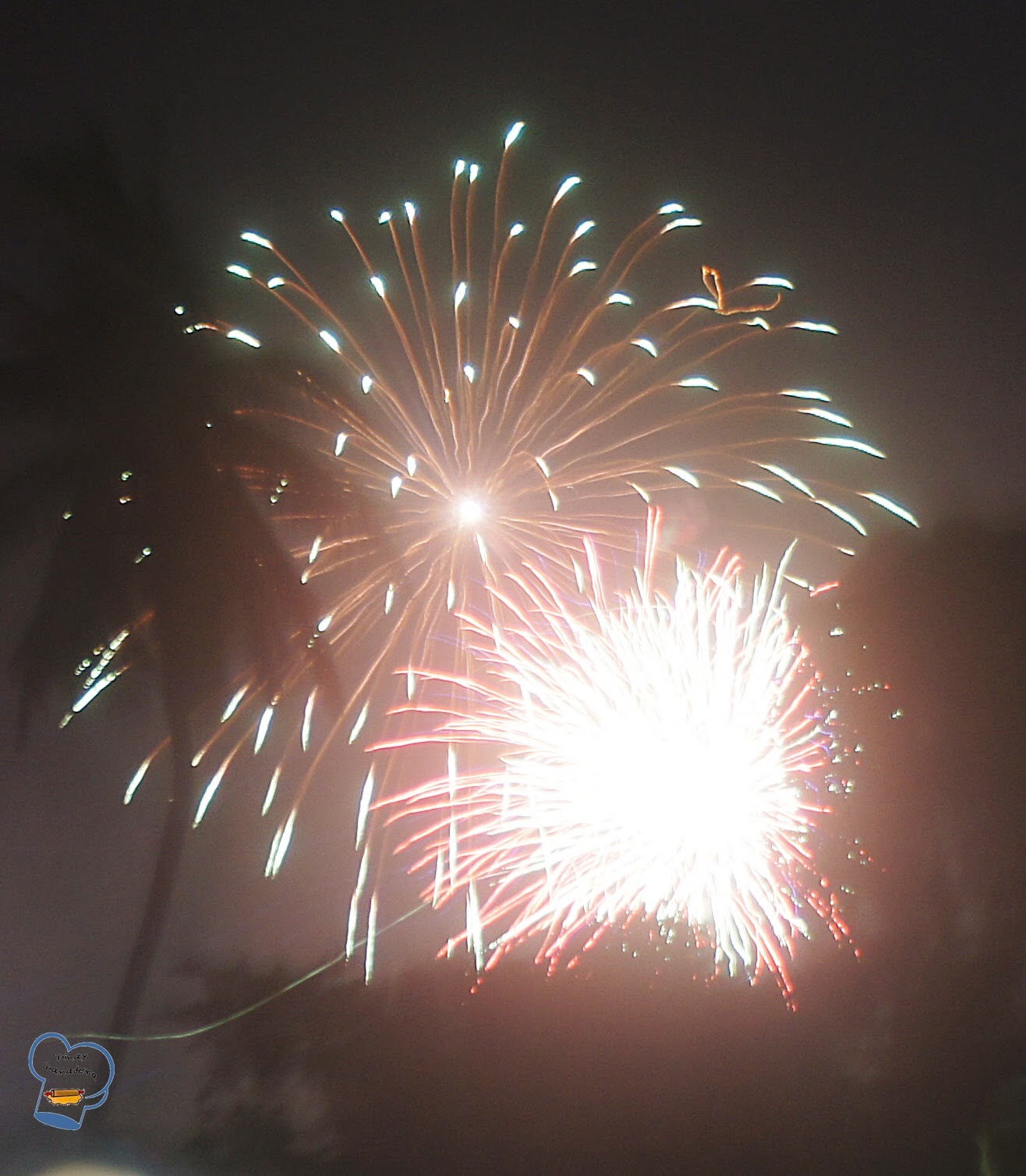