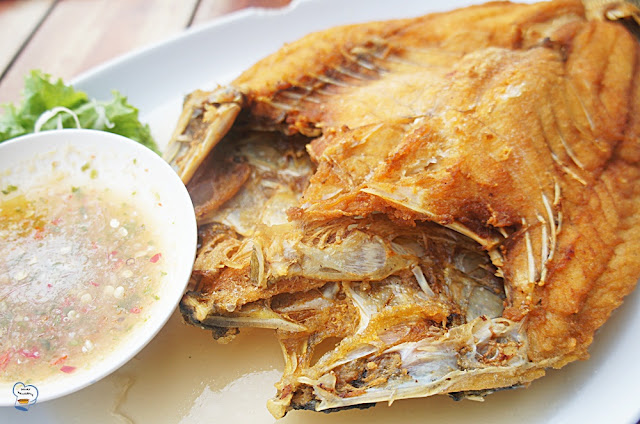 Sabeinglae is probably the most popular Thai restaurant in Samui. When you go round the island, you will see the restaurant signs plastered all over. My friend who works at Banyan Tree had so wanted to eat there after hearing good reviews from her guests. She was so excited when I said we could go later in the week.

It was my second time to the restaurant. I was there many weeks back with a friend. I only had tasted a couple dishes as the people I was with ordered more seafood dishes. Just so you know I don't eat seafood (sea creatures without scales) for religious purposes. Good thing she and I both love fish so we decided to get two fish dishes

There's a big sign outside the restaurant so you can't miss it. It's a walking distance from  Grandfather and Grandmother rock. The restaurant gets busy at around 6 so if you want to enjoy your meal in a quiet atmosphere, go earlier. We went at around 4 pm. We both missed lunch so our stomachs could hold a huge meal.


The white snapper was nicely fried. Crisp and crunchy, we even ate the bones!

Fried rice comes in three servings. Small, medium, large. We ordered medium. The serving was  enough for 3 people. Now we know what to order next time we visit. Drawback? It was a bit salty.

I would have enjoyed this dish more if I ate it with  steamed rice.  The fried rice was already seasoned and the two didn't really go well. I thought about ordering steamed rice but seeing the amount of fried rice we should finish I decided not to.   I had it with the fried fish instead. I ate the steamed fish  on its own. Better that way.

Two huge fish and a big plate of fried rice for two lean girls.Would you believe  we managed to finish them all? I normally have  small appetite but I ate a lot that day.