Still months away but my sister had already came up with a theme for her summer class at NIVA International Kindergarten. This year's theme was Spectacular Space. I was pretty sure she would ask me to make a cake that would present the concept of her topic. She did! But imagine my surprise when she demanded a cake with all the planets on it. How would I do that?

So we surfed the web, checked the recipes and design and after some thoughtful discussion we agreed on one design that I used as a model. She let me decide on flavor. I opted for a chocolate chiffon cake. I doubled the recipe so I could have 2 layers. I spread chocolate mousse filling on each layer of the cake and masked the entire cake with black buttercream.

The decoration took a while as I had to mix 9 different colors for the sun and each planet. To ease the trouble in drawing the planets, I piped the buttercream spirally. I used tip number 8 for the sun , number 6 for bigger planets and small tip for smaller planets. Had I known that the sun didn't look like how it was supposed to look like, I would have piped the buttercream using the star tip.

It was kind of difficult to get the right hue of black but I managed to arrive to the closest shade by mixing black with blue and adding a bit of brown. Using only black dye would turn buttercream into grey color. 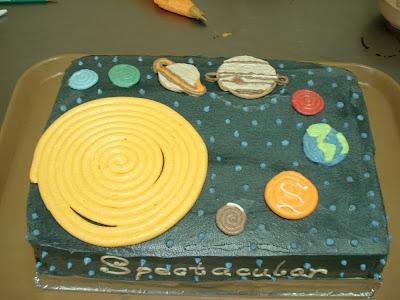 So here's the space without the planets. It still looked grey but this was the darkest I could come up with. The buttercream was already splitting and it was not a good idea to add more color. 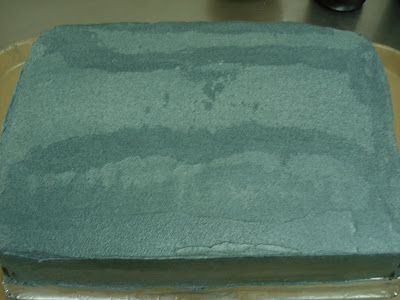 The space with the sun and the first four planets. The sun looked like just a big circle. I used the star tip to pipe the stars.  Will do better next time. 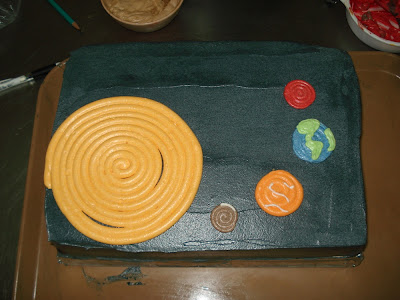 Well, it was a nice cake overall. According to my sister the kids just wanted to stare at the cake the whole day. They didn't even want to slice it.