Last weekend I got an invite to a relative's daughter's birthday party. Still tired from my trips to the hospital for my medical exam I couldn't make up my mind what to get her so I decided to make cupcakes for the birthday girl.

The recipe is based on Martha Stewart's vanilla summer cupcakes. Instead of using the Swiss-meringue buttercream, I opted for a much simpler  frosting. I substituted half the amount of butter that the recipe called for with shortening. I creamed the butter and shortening mixture with 4 tablespoons of milk and added pure vanilla extract. When the mixture became fluffy, I added melted white chocolate and icing sugar alternately. I added 4 TBSP of milk again when the frosting became dry. I piped the frosting on each cupcake and topped it with chocolate and colorful sprinkles.

I wasn't expecting the party to be big. I didn't eat any cupcakes because there were not enough for everyone! I could tell the guests liked them just by the look of their faces. 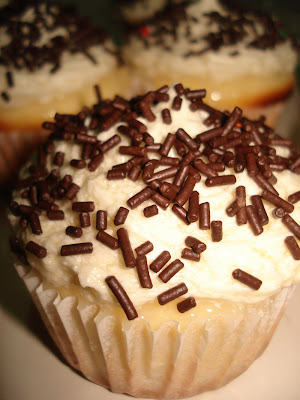 I think I put too much liquid food coloring so here you'll see the frosting splitting. No good! Wish I had a gel food coloring. 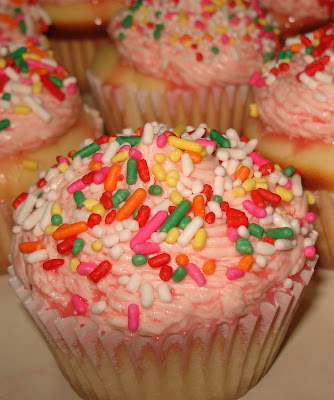