A few weeks back,  I happened to find a good bakingbook at 30 percent off at Asia Books. I skimmed through the book and when I saw the lovely recipes it contained, I  decided it was worth purchasing. I had been meaning to try the recipes at home but due to my hectic life (well, compared to my life before as a university instructor) I was unable to. 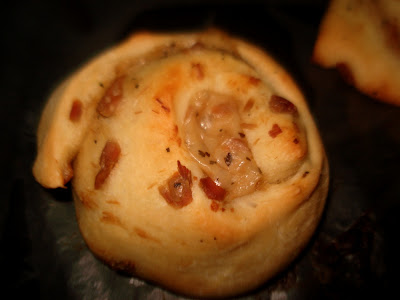 Last Friday I was in high spirits. I didn't know what caused my perfectly good mood. All I knew was that I had more than enough energy to cook and bake that day. After my Friday morning ritual, I grabbed my new baking book and looked for something good to try. I found a recipe for Pepperoni Pizza Rolls. As an Adventist Christian, pepperoni is among those foods we Adventists don't eat so  I used tuna as replacement.
I ran out of  spaghetti sauce  so I used cheese and herbs  sauce instead.

I made the dough and left it for an hour to rise. I then rolled it out into a rectangle. I smeared it with  cheese and herbs sauce. I topped it with shredded tuna and rolled it into a log. The instruction said to chill it for a while so it would be easier to cut  without compressing the dough but because I had a pudding to bake after, I cut it right away. I cut the log 1.5 inches in diameter , placed the rolls (with spaces between them) on a lined baking sheet. I brushed the top with olive oil. I covered them with damp paper towel and left them to rise for the second time. After the rolls had risen (about 20 minutes), I baked them in 170 degrees C for 20- 25 minutes or until the surface was golden brown. 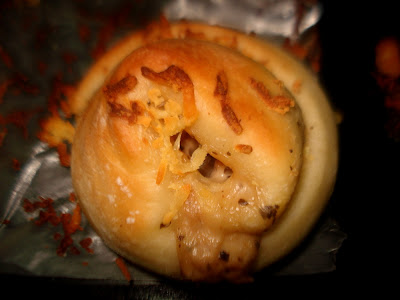 The rolls were so good that my sister and I had 3 each. I kept the rest and our friends feasted on them the following day.