Every year Sueng Jay celebrates his birthday at NIVA International Kindergarten in a unique style. This year Mc Donalds catered. To make the party more entertaining to kids, his mother, a good friend of ours, came up with an idea to give each student a cupcake to decorate. Since a friend and classmate at Le Cordon Bleu Culinary School was already making his birthday cake, I was asked to do the fifty cupcakes. Thirty with blue frosting for the boys and 20 with pink frosting for the girls. 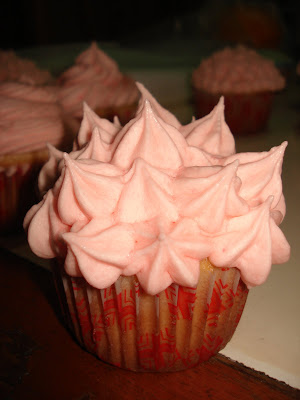 How did I do it without an assistant? Well, I planned every step in advance. I baked the cupcakes 2 days before the party and froze them. I used Vanilla Cupcake recipe I found online by chance. I made some adjustments with the ingredients. I combined the cake flour, sugar, salt and baking powder. I beat the butter, eggs, half and half and vanilla in medium speed. I added the dry ingredients to the mixture and mixed them until just blended. I added a few tablespoons of half-and half to make the batter thin. I piped the mixture into paper-lined muffin pan. I baked them at 150 degrees C for 15-20 minutes. I cooled them completely before keeping them in the freezer.

A day before the party, I made the pink and blue Vanilla Buttercream frosting. The same frosting I used to make Joshua's Mc Queen cake. I separated the frosting into 2 portions. I added 2 drops of red food color to one and 2 1/2 drops of blue to the other. I used 5 piping nozzles to pipe different style of frosting into each cupcake. 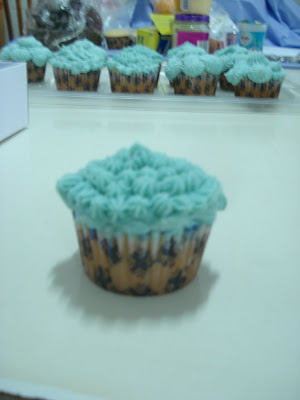 Decorating the cupcake was the part everyone waited with anticipation. All the kids were sitted in one room waiting anxiously for their cupcakes to arrive. It felt good to see the kids eyes widened as we place the cupcake in front of them. They decorated them with colorful sprinkles and candies. Those kids who didn't want to destroy their beautifully decorated cupcakes brought them home. Others who couldn't wait ate them during their afternoon break. All I could hear from them was Yummy! 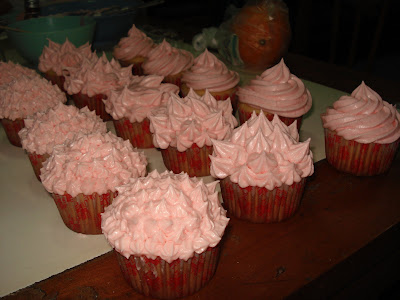 The cupcake was kept in a cup with a lid and a label with the student's name on it. 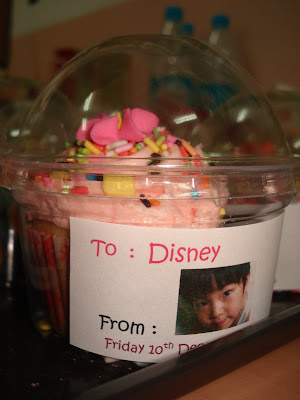 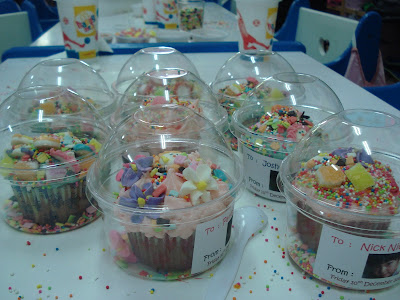 Kindergartners were engrossed in decorating. 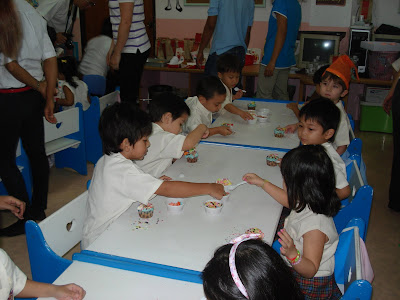 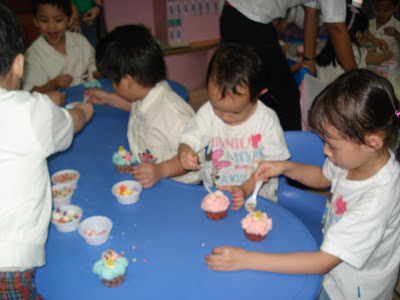 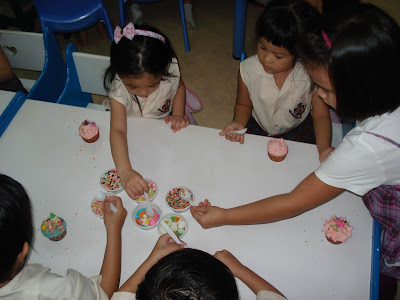