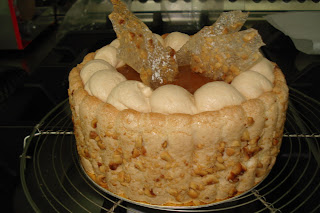 The base used here was ladyfinger biscuit sponge piped into 6 cm strips and 2 disks.The strips were used as the band and the disks were placed at the bottom and in the middle of the cake. Between these 2 disks was hazelnut cream filling. A layer of caramel mousse was spread over the biscuit. The top was decorated with caramel mousse piped into round shapes. Caramel glaze was placed in the middle.

Wonder what I stick in to the caramel glaze? It was normal sugar spread on to a tray, then put in the oven to melt and dry. Once dry, I took it out of the oven and immediately cut it into desired shape.
Tip: If it hardens, cutting is difficult so put it back in the oven to soften a bit. I sprinkled icing sugar on them before use. 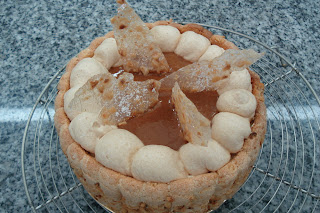 Chiao Yen, me and Cha showing off our cakes. 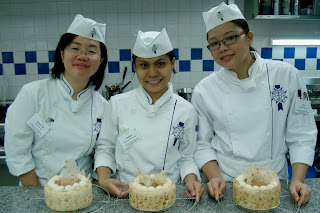 This cake is a winner in everything from design to taste but it has too many components, long procedure.


Before making the joconde, I had to make a cigarette batter, separate it into 2, add yellow and red food-coloring into each mixture, spoon it onto a Silicon alternately and spread them out. To create a design on the joconde, I scored the batter with a clean finger. I froze it before pouring the joconde (watery consistency) over the cigarette mixture and baked. Why watery? So it can fill the spaces created after you score the cigarette batter. This joconde biscuit is used as the “band” of the cake.


Dacquoise was used for the base and middle of the cake.
I placed the "band" in the ring, put 1 dacquoise disk on the base, spread the passion fruit cream over the disk and covered it with the other disk. A thick layer of raspberry mousse was spread on top to mask the upper dacquoise. The top was coated with raspberry mixture and decorated with fruit. 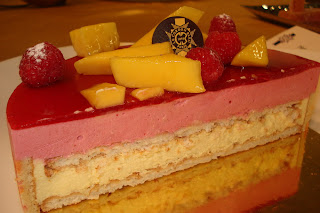 I cut the mangoes in flute, placed the raspberries dusted with icing sugar on top. 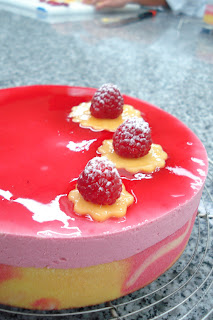 According to the chef, the cake was just perfect.Yipee! 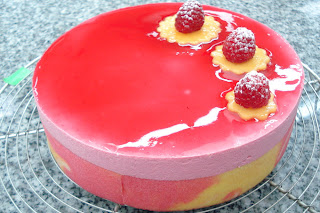 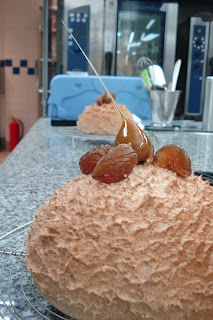 For the decoration, I formed the chestnut paste into a teardrop shape, thread it onto a skewer (toothpick can also be used) and dipped it into the caramel. The caramel was allowed to drip until dry. 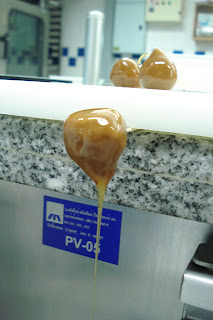